The Story so far… Childe Harold has fled his native land and the empty pleasures of his hall, because there’s nothing and no one to keep him at home. He is about to arrive in Portugal. (For earlier portions, see the Childe Harold Project)

On, on the vessel flies, the land is gone,
And winds are rude in Biscay’s sleepless bay.
Four days are sped, but with the fifth, anon,
New shores descried make every bosom gay;
And Cintra’s mountain greets them on their way,
And Tagus dashing onward to the deep,
His fabled golden tribute bent to pay;
And soon on board the Lusian pilots leap,
And steer ‘twixt fertile shores where yet few rustics reap.

Cintra = city northwest of Lisbon. Sintra seems to be the modern spelling.

Tagus = longest river on the Iberian Peninsula. (Tajo in Spanish, Tejo in Portuguese; Tagus is Latin.)

Oh, Christ! it is a goodly sight to see
What Heaven hath done for this delicious land!
What fruits of fragrance blush on every tree!
What goodly prospects o’er the hills expand!
But man would mar them with an impious hand:
And when the Almighty lifts his fiercest scourge
‘Gainst those who most transgress his high command,
With treble vengeance will his hot shafts urge
Gaul’s locust host, and earth from fellest foemen purge.

“Gaul’s locust host” refers to the French. Apparently, Byron sees war with the French as a form of divine punishment on the Portuguese for their destruction of the landscape. Lacking specifics, I’ll just read on.

What beauties doth Lisboa first unfold!
Her image floating on that noble tide,
Which poets vainly pave with sands of gold,
But now whereon a thousand keels did ride
Of mighty strength, since Albion was allied,
And to the Lusians did her aid afford
A nation swoll’n with ignorance and pride,
Who lick, yet loathe, the hand that waves the sword.
To save them from the wrath of Gaul’s unsparing lord.

Lisboa or Lisbon, is the capital of Portugal

“Which poets vainly pave with sands of gold” – this line, combined with those from Stanza XIV:  “And Tagus dashing onward to the deep, His fabled golden tribute bent to pay” seem to have a story behind them; I’m guessing false or exaggerated tales of gold.

England (Albion) came to aid the Portuguese (Lusians), with “a thousand” ships (is he being literal here? – that’s quite a fleet). Byron paints quite an unflattering image of the nation of Portugal.

But whoso entereth within this town,
That, sheening far, celestial seems to be,
Disconsolate will wander up and down,
Mid many things unsightly to strange e’e;
For hut and palace show like filthily;
The dingy denizens are reared in dirt;
No personage of high or mean degree
Doth care for cleanness of surtout or shirt,
Though shent with Egypt’s plague, unkempt, unwashed, unhurt.

shent = destroyed / also “to put shame to” or reprove

Poor, paltry slaves! yet born midst noblest scenes—
Why, Nature, waste thy wonders on such men?
Lo! Cintra’s glorious Eden intervenes
In variegated maze of mount and glen.
Ah me! what hand can pencil guide, or pen,
To follow half on which the eye dilates
Through views more dazzling unto mortal ken
Than those whereof such things the bard relates,
Who to the awe-struck world unlocked Elysium’s gates?

The scene is more dazzling than anything described by … earlier I thought Shakespeare, but W. Hiley, editor of an 1877 edition I found on Google Books, says Dante.

ken = another one of those nice old words, meaning the range of vision; sight or view; the range of perception, knowledge or understanding.

Elysium = the Greek version of paradise, a place often mentioned in old poetry.

The horrid crags, by toppling convent crowned,
The cork-trees hoar that clothe the shaggy steep,
The mountain moss by scorching skies imbrowned,
The sunken glen, whose sunless shrubs must weep,
The tender azure of the unruffled deep,
The orange tints that gild the greenest bough,
The torrents that from cliff to valley leap,
The vine on high, the willow branch below,
Mixed in one mighty scene, with varied beauty glow.

The word “toppling” caught my e’e – it’s an interesting word choice. Perhaps the crags seem toppled or overthrown by the convent; it also conveys the feeling of resting “atop” the crags. Also, you get a nice assonance with “toppling” and “convent.” That’s my thought, anyway.

hoar = a word you see oft in Romantic poetry. Hoar, hoary  – anything that’s white or gray, or ancient can be described with this word. It’s also a synonym for frost / sometimes I’ve seen “hoar-frost.” It’s unfortunate that this fine old-fashioned word and “whore” are homophones.

Then slowly climb the many-winding way,
And frequent turn to linger as you go,
From loftier rocks new loveliness survey,
And rest ye at ‘Our Lady’s House of Woe;’
Where frugal monks their little relics show,
And sundry legends to the stranger tell:
Here impious men have punished been; and lo,
Deep in yon cave Honorius long did dwell,
In hope to merit Heaven by making earth a Hell.

Nossa Senora de Peña or “our Lady’s house of woe” should be translated as “our lady of the rock”  (rock is peña; pena is Portuguese for punishment). Byron addresses the error in his notes to Cantos I-II. 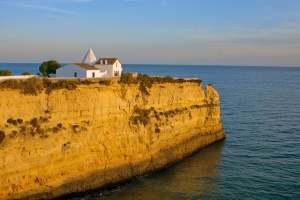 Our Lady of the Rock

I looked up Honorius in Wikipedia; he lived in the Convento de Santa Cruz da Serra da Sintra (Convent of the Holy Cross of the Sintra Mountains), lived to be 100, and spent the last thirty years of his life living in a small hole, which still exists today. Wish I had an image of it! Robert Southey, a poet and contemporary of Byron’s wrote this:

Inscription for the Cell of Honorius, at the Cork Convent, near Cintra
Robert Southey (1774–1843)

HERE, caverned like a beast, Honorius passed,
In self-affliction, solitude, and prayer,
Long years of penance. He had rooted out
All human feelings from his heart, and fled
With fear and loathing from all human joys.
Not thus in making known his will divine
Hath Christ enjoined. To aid the fatherless,
Comfort the sick, and be the poor man’s friend,
And in the wounded heart pour gospel-balm,—
These are the injunctions of his holy law,
Which whoso keeps shall have a joy on earth,
Calm, constant, still increasing, preluding
The eternal bliss of heaven. Yet mock not thou,
Stranger, the anchorite’s mistaken zeal!
He painfully his painful duties kept,
Sincere, though erring. Stranger! do thou keep
Thy better and thine easier rule as well.

And here and there, as up the crags you spring,
Mark many rude-carved crosses near the path;
Yet deem not these devotion’s offering—
These are memorials frail of murderous wrath;
For wheresoe’er the shrieking victim hath
Poured forth his blood beneath the assassin’s knife,
Some hand erects a cross of mouldering lath;
And grove and glen with thousand such are rife
Throughout this purple land, where law secures not life!

So – not only are the Portuguese (of all social classes) dirty and dingy in appearance, but apparently the murder rate is out of control. Byron is a young tourist, already guilty of a translation error – perhaps not every cross denotes a murder.

Here is what he says in his notes to Cantos I-II:

“It is a well-known fact, that in the year 1809 the assassinations in the streets of Lisbon and its vicinity were not confined by the Portuguese to their countrymen; but that Englishmen were daily butchered: and so far from redress being obtained, we were requested not to interfere if we perceived any compatriot defending himself against his allies. I was once stopped in the way to the theatre at eight o’clock in the evening, when the streets were not more empty than they generally are at that hour, opposite to an open shop, and in a carriage with a friend; had we not fortunately been armed, I have not the least doubt that we should have adorned a tale instead of telling one.”